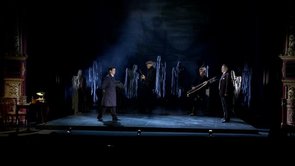 Here’s a promotional video we created for ‘Guerilla Days In Ireland’: a play that’s currently on tour around Ireland and getting some really positive feedback. It’s based on the book by Tom Barry, an account of his time with the IRA. It has been adapted for stage by Neil Pearson, who also directs.

We also worked on some visuals and video content for the play itself which was a little different from what we usually do, but turned out really well I’m happy to report! You’ll no doubt see posters advertising this around, or hear the radio ad that’s in circulation, but you should certainly go to see it. It’s a very powerful piece of theatre.